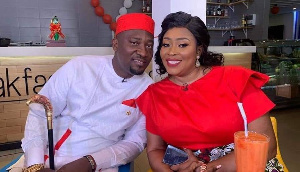 A key member of the governing New Patriotic Party, Afia Akoto has recalled her difficult journey towards childbirth and the type of support she received from former Upper East Regional Minister, Tangoba Abayege during her pregnancy.

In a Facebook post paying tribute to the former regional minister, Afia Akoto who is married to Deputy National Organiser of the NDC, Chief Biney, said she finally gave birth after having suffered countless miscarriages.

She adds that throughout her pregnancy she was largely supported by Madam Abayege who cooked for her without having any idea she was even pregnant and suffering COVID at the time.

“Today I want to show gratitude to this Honorable Minister (former). I had COVID, then realised I was pregnant after countless miscarriages and not expecting. I had to be working because then there was no CEO at my end. All through my 9 months, I was at work and sitting for hours in meetings in fear of coming in contact with covid again. This woman, who had lost a painful election didn’t know I was pregnant, but week In, week out she will cook in pots without me requesting for it and not knowing my condition. It was a difficult time for me because I have no househelp to manage the kitchen duties for me,” she shared.

To her, the selfless support she received from the former minister was a manifestation of God’s helping hand.

She revealed that the former regional minister became surprised when she later found out she had been pregnant all along after she gave birth.

“Then I understood that God listens to prayers and brings us helping hand when the time is right. She did send me food almost every weekend till I had my baby and then she was so shocked. And was like “why didn’t you tell me you were pregnant”. I told her “God spoke to you to take care of me and my family because he knew you alone could do it effortlessly”. The sad part is the one I felt will understand me even without giving her reasons I needed food rather got angry with me and treated … you it will be for another day,” she added.

She thus called on her Facebook friends to help her appreciate Madam Tangoba Abayage who she described as a lioness.

“I will be ungrateful if I don’t openly ask you all to help me bless this woman for me. If the Bible makes us believe there is power in the tongue. Then our blessings will manifest in her life coming 2022 and beyond. My big sister , my #WC the lioness Tangoba Abayage,” she wrote.