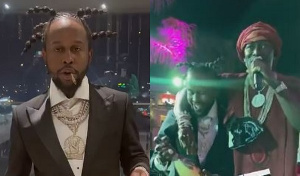 play videoPoocan buys a Ace of Spad for $100,000 from Cheddar

Jamaican dancehall artiste on New Year eve won the hearts of dignitaries and entertainers who had gathered at Number One Oxford Street Hotel and Suites in Osu after purchasing a bottle of champagne for 100,000 dollars.

The gala witnessed Cheddar auctioning an Armand de Brignac Ace of Spades Gold Brut champagne which’s original price is a little above $300 but this special edition came with “gold dust” according to Cheddar.

The host auctioned the bottle of champagne at a price of 20,000 dollars only and called on the highest bidder.

In a video by blogger, GH Hyper, Cheddar was quoted saying: “I mean look at the people, Popcaan is coming from Jamaica, Davido Nigeria. People are coming from America, all over the world 2,000 dollars don’t buy their ticket.”

Just as he was about to finish his sentence, a white man walked up to him and offered to buy the Ace of Spade at 35,000 dollars.

Before it could go, award-winning Jamaican artiste, Popcaan, now known as the man of the night, shouted 100,000 dollars!

The singer was led on stage and presented his bottle of champagne amidst huge cheers from the crowd.

Present at the gala were Stonebwoy, Davido, Eugy Official, Stefflondon, Yandy Smith and Kelvin Mensah better known as PJ Kev among others.