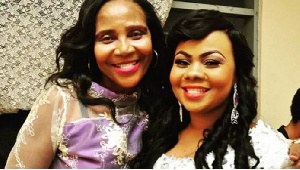 Prophets warned by IGP to desist from 31st Night prophesies

Kumawood actress, Maame Fante, popularly known as ‘Agaga’ has repeated Inspector General of Police (IGP) George Dampare’s warning to various clergymen to be mindful of statements they make in the name of prophecies.

According to the mother of Empress Gifty, Maame Fante, she has reminded them of the IGP’s warning.

“I have read it and have started posting to them that something is on the mountain. Don’t joke with it. Don’t change your bedroom because of prophecy,” she said.

In recent year’s, 31 December watch night services have been characterized by prophetic declarations, often predicting the death of public figures.

The Ghana Police Service via a release last Monday cautioned men of God to be circumspect in their prophetic duties.

In a subsequent media interaction, the Director of Public Affairs for the police, ACP Kwesi Ofori has reiterated that the police will in effect arrest any pastor who will issue a prophecy that may lead to fear and panic, and as well cause the prosecution of such prophets.

Responding further to the police, the Man of God called on prophets to be extremely circumspect in going about their duties.

He noted that the police, by their actions, may be leading the nation to the biblical age where prophets were persecuted for doing their work.

“My job here is to also call on all the churches, apostles and prophets to be very careful how you prophesy before you end up in jail because of prophecy. When a man says if you are not careful about your prophecy you’ll end up in jail, it’s taking you back to the days of Daniel.