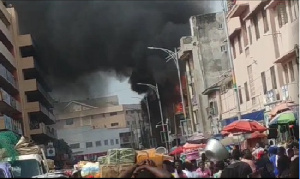 Fire guts some shops at Makola

The business world experienced some major activities this year.

Here are some of the business stories that made headlines in 2021.

In January this year, African Heads of State met in Kigali, Rwanda to launch the Continental Free Trade Area.

The trading phase under the African Continental Free Trade Area (AfCFTA), signed by 54 of the 55 countries in Africa, was set to begin from January 1, 2021.

The deal unites an estimated $3 trillion market, and could help to realise more than $84 billion in untapped intra-African exports, according to a new report by the African Export-Import Bank (Afreximbank).

Another big blow to one of Ghana’s biggest business centers was the Makola fire.

In July this year, a three-story building at Makola – actually opposite the Makola Shopping Mall, was razed down by fire that was only completely put out after days.

Meanwhile, another fire ravaged through parts of the Makola Market in the Central Business District of Accra.

The fire reportedly, started at about 7:25 am on the morning of Sunday, August 15, 2021, in parts of the inner perimeter of the new Makola Shopping Mall.

According to the report, the cause of the fire was not immediately known.

The Mall had shops ranging from hair and cosmetic products, to clothes, shoes, jewelry, and even fabric.

The Ghana National Fire Service was dispatched to the scene early enough to douse the fire.

Also fuel prices have been in the news throughout the year. At some point the prices of petroleum products saw an upward slope for a long period of time. This was attributed to rising cost of oil on the international market. However, the government of Ghana introduced a number of taxes on fuel products up to GHC1.40. This was kicked against by the general public. Commercial drivers decided to embark on a sit-down strike to drive home their concerns, leaving commuters stranded. Government in turn engaged the drivers and promised to address their plights in the 2022 mid-year budget review.

Also, poultry farmers were hit by the outbreak of bird flu which killed thousands of birds on the farm. The Ministry of Food and Agriculture secured some funds from government to compensate affected farmers.

And finally, the controversial e-levy that was to be introduced on January 1 2022.

The Finance Minister in his presentation of the 2022 budget announced the introduction of a 1.75% levy on all electronic transactions. This has since come under various criticisms and backlash since stakeholders thought it would erode the gains made by government in promoting financial inclusion among Ghanaians.