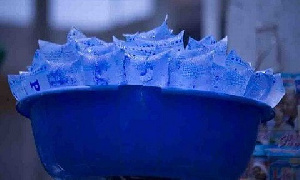 Some producers and consumers of sachet water in the Ajumako-Enyan-Essiam District have expressed reservations over the newly announced prices.

The stakeholders have denounced the prices, saying they were too high, citing general economic hardship.

According to them, it was unacceptable for a country with more water bodies than many around the world to buy water at exorbitant prices.

The prices announced by the National Association of Sachet and Packaged Water Producers is yet to take effect in the area, four days after the effective date; Monday, December 27, 2021.

The Association said in a statement on Friday, December 24, that: “Iced sachet water will be retailed at 40ps, and a bag of sachet water should sell at GHC4.50 for retail trucks and GHC6.00 by mini retail shops.”

Contrary to the directive, the commodity sells between GHC2.50 and GHC3.00 and is retailed by mini shops at GHC3.50 and GHC4.50 in the area.

A sachet of water, also known as “pure water” still sells at 20 pesewas and 50 pesewas for three.

In separate interviews with the Ghana News Agency (GNA), some water producers observed that even though the increment had become necessary due to the incessant rise in production cost, it should be marginal.

“I am expecting an increment but not that much. I don’t think GHC6.00 for a bag of water is okay; it’s too much. It will really kill us. In fact, the water will sell at 50 pesewas because the sellers will complain about not having the 10 pesewas change,” he said.

He suggested that a bag should be retailed at GHC4.00 maximum adding that “for us, we are still selling at the old price because we normally sell our water below the general market price”.

Mr Awudza called for government’s intervention to help stabilise water prices through fuel price stabilization, because whenever the price of fuel shot up, it had a rippling effect on prices of other commodities.

Mr Noah Dunyo, the Supervisor and Engineer of Blue Wave, a sachet water company at Ajumako Asasan, said the increment was “too much” and that customers were already complaining about it.

“Now we are selling at GHC3.00 and so if it is GHC3.50, I think it will be okay. GHC4.50 is too much,” he said, adding that it would be difficult to achieve a standard price in the area due to competition.

Some consumers who spoke to the GNA called for the immediate rescission of the new price and queried why a sachet of water should be sold at 40 pesewas.