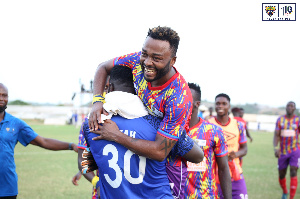 A lot of football transfers involving Ghanaians players in the local league and outside the boundaries of Ghana happened in the year under review.

19-year-old Kamaldeen Sulemana has become fans favorite in France after signing for Stade Rennes from FC Nordsjælland in a deal worth €15m + €5m in bonuses.

Ideally, the price tag of Kamaldeen couple with his performances would have been fit for the GhanaWeb transfer of the year.

However, Gladson Awako’s transfer from the Great Olympics to join rivals Accra Hearts of Oak and the events that unfolded after the transfer makes it the most talked about deal in 2021.

Gladson Awako joined Accra Hearts of Oak from Great Olympics before the start of the 2021/2022 football season for a reported fee of GH¢100,000 but left the team’s camp after three weeks citing personal reasons.

The midfielder quit training with the Phobians in September and thought about leaving the club few weeks into signing his contract.

It was widely reported that Awako came under spiritual attack after signing the lucrative deal and feared for his life, prompting him to stay home and hold personal training.

However, Awako returned to training on Tuesday, November 23, 2021, having promised to do so after meeting with Teshie Youth chief Original Nii Martey Laryea I on Monday, November 22.

The club has struggled in his absence, drawing three and losing one of the opening four matches but since Gladson Awako made his debut for Accra Hearts of Oak, the Phobians haven’t lost a game in their last four games in all competitions.

Accra Hearts of Oak have played Dreams FC, Elmina Sharks, Berekum Chelsea and Accra Lions and they have drawn only one in the 2-2 drawn game at the Theatre of Dreams of Dawu.

Awako scored the only goal against Elmina Sharks to steal the three points for the Phobians who are now 11th on the Ghana Premier League table with two games to spare.

Gladson Awako impact in the Hearts of Oak team as the Phobians try to turn the season around coupled with the controversies surrounding his move has made him the GhanaWeb transfer for the year 2021.