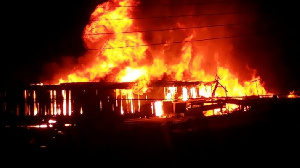 The incident happened at Lapaz

All four occupants of a chamber-and-hall self-contained property near the Ashanti Home Touch restaurant at Abeka Lapaz in the Okaikwei North municipality of the Greater Accra Region have been burnt to death in the wee hours of today, December 31, 2021.

The family included a father, a mother and their two children aged six years and three months.

An eyewitness told Accra 100.5 FM’s mid-day news on Friday that the fire started around 3:30 am from the hall of the building.

He explained that the family was fast asleep when the fire outbreak happened.

According to the eyewitness, the fire forced the family to take refuge in the bathroom but they could not survive the flames.

He said when the neighbours managed to douse the fire after several calls to the Ghana National Fire Service failed to yield any results, they found the charred bodies of the family in the bathroom.

It is, however, not clear what caused the fire outbreak.

Fire officers who later got to the scene were tight-lipped on the possible cause.