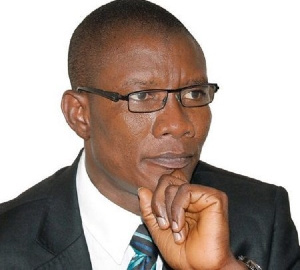 Odamtten, has described the Speaker of Parliament, Rt. Hon. Alban Sumana Kingsford Bagbin, as the best ever in the history of Ghana’s Parliamentary democracy.

In an interview with journalists in Tema, Hon. Odamtten said the current Speaker is establishing a standard that is finally leading Parliament away from its unfortunate image as a rubber stamp for government.

“What you are seeing in Parliament today, where every major issue is hammered out to the barest details is how the founding fathers of our fourth republican democracy intended for parliament to function, not the rubber stamp image that it over the years carved for itself,” Hon Ashai Odamtten said.

He added, “and we are here because I think we have the finest Speaker ever in the Rt. Hon. Alban Bagbin.”

executives and members of the NDC in Tema on the 30th of December, 2021.

The MP noted that under Speaker Bagbin, Parliament has become lively with the Executive put on its toes by the Legislature. Among other things, Bagbin will go down in history as the Speaker who got the Presidency to change the budgetary allocations to both Parliament and the Judiciary.

Speaker Bagbin had threatened the executive that if the miserly allocations to the Legislature were not increased, the 2022 budget would not pass.

Hon. Odamtten said that the Speaker of the 8th Parliament has so far been fair, neutral but firm, debunking accusations by the NPP Majority side of the House that Rt. Hon. Bagbin is biased in favour of the NDC.

“In regards to that (claim that Bagbin is biased) I think the developments around the e-levy debacle shows that that claim is not true. If the Speaker were biased towards the NDC, he would have simply jettisoned the rogue Parliament that the Majority constituted to overturn the earlier rejection of the (2022) budget after he returned from medical leave in Dubai.

“However, rather than do that, he asked Parliament to forge ahead from there and iron out all areas of controversy. I think that rather is the mark of not only an impartial, but a forward-looking Speaker.”

experience that he has brought to the Speakership of the 8th Parliament, saying even though he has been in charge as Speaker for only one year, there has been a

“Finally, the Executive has been jolted into the realization that Parliament is not a pushover. The days when government could simply get MPs arrested and put into cells are over because this Speaker knows his onions.”

Meanwhile, the MP used the opportunity to wish all constituents of Tema East a Merry Christmas and a happy new year.

“I want all Ghanaians to know that in the Minority, they have trustworthy representatives of the people. We will fight every single move that will bring further hardships to the people, including the e-levy.”

Hon. Ernest Norgbe, Member of Parliament for the Ashaiman Constituency, on his part, said, “Speaker Bagbin is one of the best in the history of the country and admired by many parliamentarians in the other side of the political divide and this explains why president Akufo-Addo was full of praise for speaker bagbin on the day of his inauguration.”