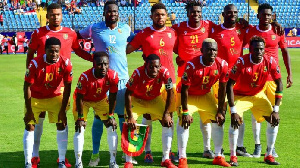 The National Elephants of Guinea

The Syli Nationale(The National Elephants) of Guinea will be making their 13th AFCON appearance after booking their tickets for Cameroon 2021 in a slim victory over Mali in the fifth round of fixtures of the AFCON qualifiers in Group A.

The Guineans couldn’t make it to the knockout stage in their debut appearance in 1970. However, Mamadou Aliou Keita and Bengally Sylla powered them to a second-place finish after six years.

The Syli Nationale finished the tournament as the highest-scoring side with twelve goals.

After that remarkable feat, they were rare in the continental competition, managing to qualify on only three occasions out of ten. In those three appearances, the Guinean Nationale team recorded a single win out of the eight games they played in all editions. They failed to proceed to the next stage in those tournaments as well.

Since then, the likes of Aboubacar Sidiki Camara, Sambegou and Ousmane Bangoura, and Pascal Feindouno all came through the ranks with some renaissance but not one that could match their best record in 1976.

But for 2012, the Guineans have managed to reach the knockout stages in each of their appearances since 1998.

This will be the first time the National Elephants will make a back-to-back appearance since 2006 and 2008.

Naby Keita of Liverpool, Amadou Diawara of AS Roma, and Issiaga Sylla of Toulouse Football club have taken the mantle with a mandate to break the quarter-final jinx. Meanwhile, Senegal and Zambia together with Malawi stand in their way in the group stages.