I have recorded over 20 songs with Shatta Wale, Medikal discloses

Rapper Medikal has been crowned the “most realest” Ghanaian artiste by his godfather and confidant, Shatta Wale.

The leader of the Shatta Movement, Charles Nii Armah Mensah, better known as Shatta Wale has revealed why he tattoed Medikal’s initials on his left arm.

The capitalized ‘MDK’ tattoo will forever be on the ‘Ayoo’ hitmaker’s body.

According to Shatta, described by many as a controversial artiste, the love he has for his friend is deeper than blood.

“You are the most realest Gh artiste and that’s why I have your name on my skin …This Tattoo is till death do us apart !!! DTB is Blood …Just keep correcting me when am wrong like you do and shine for me. My greatest Superstar,” read a tweet by Shatta Wale on Thursday, December 30.

The statement by the dancehall artiste comes after Medikal took to his official Twitter page to appreciate the unflinching love and support received from his godfather, Shatta Wale.

According to him, their friendship has birthed over 20 recorded songs.

The news does not come as a surprise to followers of the two award-winning artistes.

On December 25, Shatta and Medikal held one of the most attended events this December, the ‘Freedom Concert’ at the Accra Sports Stadium.

“Shatta! Thank you so much for coming into my lif ! You’ve taught me so many things about life and this industry! You keep giving me stuff even when I don’t ask! We’ve recorded over 20 songs together! I love you so much King! I understand why they don’t understand you!” MDK wrote. 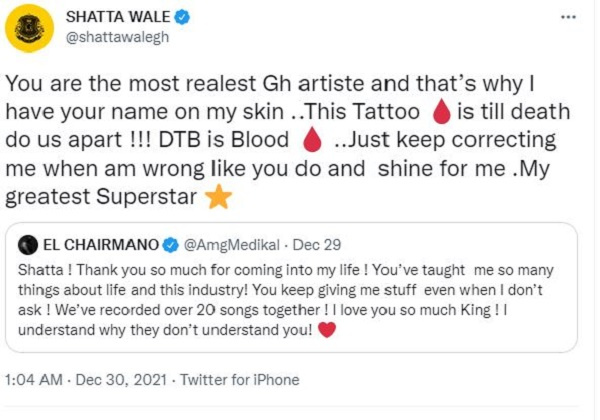 Words can’t explain how I feel about this ! @shattawalegh love you die King, Deeper than blood ❤️ pic.twitter.com/AHvvWJsu92