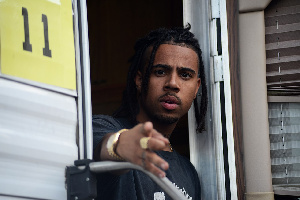 Speaking on the ‘Myd Morning Radio Show’ with Rev Erskine on Y 107.9 FM, Vic Mensa explained; “The first time I got to Ghana, I got robbed within 5 minutes. I was 11 years old and it was funny, that was my first time being outside of America, I landed at the airport and it was crazy.

“I didn’t understand the language, the atmosphere was different. I couldn’t get a cab, someone walked up to me and told me to give him money and he will get me a cab and he left”.

“It was funny”, he described the experience at the Kotoka International Airport on his arrival.

Vic Mensa further mentioned that the perception of Ghana in the diaspora had changed and lots of people had intentions of coming to the country.

“The perception of Ghana is currently transforming and many more Black Americans are coming and expressing interest in being here,” he said.

Theft and duping at the airport is one experience that many tourists, visitors and airport officials have condemned and described as horrific and a bad impression of Ghana to the international community.

The act, in recent times, has become a money-making avenue for some people and some Airport Officials.

Individuals who have been caught in the act have been made to face the laws of the country, some fined some expelled and others imprisoned.