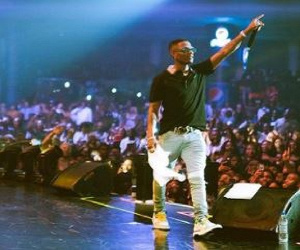 Wizkid calls for unity in Africa

The highlight of his performance was when fans who have waited long hours to see him on stage fought over a white towel he threw into the crowd.

The Nigerian singer is considered as one of the biggest acts from the continent to have gone international with his music.

He has collaborated with the likes of Drake, Wale, Young Jeezy and Akon.

Wizkid over the years has proven to have a special love for Ghana.

Right from his frequent visits to collaborations with local artistes, he visits Ghana more than twice a year.

No wonder his fans in Ghana scrambled to get hold of his giveaway white face towel.

It was a survival of the fittest as close to 10 persons struggled to get hold of the towel that was once owned by Wizkid.

Meanwhile, the singer during his performance called for unity among Ghana, Nigerian and the entire African continent.

“I got a message for you tonight. I don’t care if you are black, white, blue if you are purple, I don’t give a fuck. I will show you the same love I show my brother or sister, yeah and I want you guys to understand something, It is one Africa man. We move together in numbers baby. and I want you guys to know it is one Africa every fucking day baby. Ghana, Nigerian, Kenya, we are all the same the people men,” Wizkid noted.