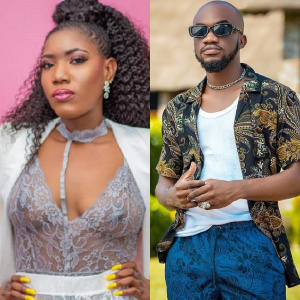 Victoria Lebene and Mr Drew on his performance at Wildaland Festival

Ghanaian actress and entrepreneur, Victoria Lebenee has not gone easy on Mr. Drew after it was reported that the artiste walked out on his fans during his performance at the Wildaland Festival.

The actress who was present at the event described the artiste’s demeanour as poor and immature and went on to call his performance ‘crap’ in an Instagram post.

“The machine failed you, but what happens to your stagecraft, composures, manners and even your talented vocals? We are mad at you this is the message if no one has told you yet I’m doing that here on behalf of the people that drove extra miles to witness your crap! So disappointed in you”, she stated.

She described Mr. Drew’s actions as disrespectful and immature, whilst urging him to exhibit humility especially with his fans, considering they can either make and unmake him.

“You this Drew Guy…@mrdrewofficial Remarks of you is very appalling at the WILDFEST 2021. 1000’s of people travelled very far and all the way into the WILD just to have a swell time, only for you to display a very poor and immature performance

“Your act at the first-ever edition of WILDALAND was and is very disrespectful, disgusting and insulting. How long have you been in the music industry for you to display such an act? Ghanaians make and unmake you should have that in mind, that the least act you disregard may be what would bring you down. Don’t be too proud to be able to comport yourself when the unfortunate happens!” she posted.

It has been reported by peacefmonline.com that Mr Drew who was billed to perform experienced hitches with the sound during his act and decided to implore his fans if he should continue with his performance in spite of the challenges he encountered to which they approved because they enjoyed his performance.

The artiste after several encounters ended his performance abruptly and walked off the stage leaving fans, some of whom had traveled long distances and paid tickets to watch him perform, disappointed.