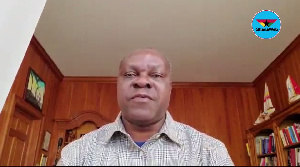 Dr. Kobina Arthur Kennedy has called on the ruling New Patriotic Party to focus on the current mandate of President Nana Addo Dankwa Akufo-Addo instead of distracting itself with the 2024 polls.

The one-time presidential aspirant wants the NPP to focus on delivering on promises made in the Akufo-Addo final term that spans between 2021 – 2025.

He is worried that the party recently started considering proposals on whether or not to elect a flagbearer for the 2024 polls earlier than usual. Arthur K argues that doing so will be counterproductive.

In an interview weeks ago on Accra-based Hello FM, he told host Adakabre Frimpong Manso, “Electing a flagbearer one year to the election is a good idea. If you speak to Ghanaians, it will assume that the 2020 mandate is not important any longer. It seems that we are more interested in the next mandate than the current mandate.

That is unfortunate because Nanan Addo Dankwa Akufo-Addo has two solid years to build a record for next flagbearer. If we elect someone that early, we wil be creating in the mind of the party and the country, two presidents. The coming one and the going one,” he stated.

Delegates at a conference held recently in the Ashanti Region referred a raft of proposals to a Committee pending final decisions at a later date.