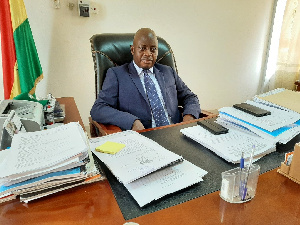 The Upper East Regional Minister, Mr Stephen Yakubu, has observed that the New Patriotic Party (NPP) is the only party which has what it takes to change the destiny of Northerners from poverty to economic empowerment.

The Regional Minister, who made the observation when the District Chief Executive for the Nabdam District, Agnes Anamoo, organised a party for 450 polling station and constituency Executives on Wednesday, stated that the numerous Social Intervention programmes introduced by the NPP government attests to this fact.

The Regional Minister stated that the NPP Government’s Social Intervention of the Free Senior High School Policy has come to cater for the educational needs of students from the area and entreated parents to take advantage of the opportunity to better their lives.

The Regional Minister who stated that northerners are the greatest beneficiaries of the NPP’s Government Social Intervention, mentioned for instance that under the Planting for Food and Jobs, smallholder northern farmers are the most beneficiaries.

He mentioned the construction of the Bolgatanga –Bawku road initiated by the NPP government as one of the major landmark projects being executed by the NPP Government in the region.

He intimated that irrespective of the fact that northerners are the main beneficiaries of the NPP government’s social interventions, many northerners do not endorse the party during elections and appealed to such people to change the narrative.

Mr Yakubu explained that it is only when the narrative is changed that the NPP government can continue to execute more social interventions to benefit a lot of northerners.

The District Chief Executive (DCE) , on her part impressed upon the polling station and constituency executives and all the party supporters to bury their differences and work in unity to help wrestle the Nabdam seat from the National Democratic Congress Party.

The DCE who pledged to support the polling station and constituency executives to win the parliamentary and presidential seats in the forthcoming 2024 general elections, thanked the Vice President, Alhaji Dr Mahamudu Bawumia , for aiding her to organise the party for the 450 participants.