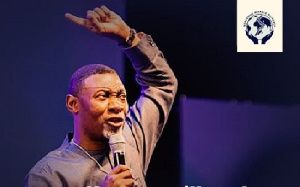 Founder of the Worldwide Miracle Outreach, Dr Lawrence Tetteh, has said he is against prophecies that indicate that someone is going to lose his or her life.

Relying on examples in the Holy Bible, he cautioned Men of God who deliver prophecies to do so in wisdom and in a discreet manner.

He told Berla Mundi on the New Day show on TV3 Thursday, December 30 that “I am against prophecies that say somebody will die. Prophecies should have some level of decorum and they must be scripture-based. There are four cardinal things that we should not lose sight of, we have to be wise in our prophecies. So wisdom is very paramount and in all things we do, we have to be wise. So, the way we even deliver the message should be delivered within a level of wisdom. Number two, there must be discreetness about it.

“If we decide to really go ahead then being circumspect is another aspect. There are instances in the Bible that prophecies were given to great men of God and they handled it with wisdom. One of such was the prophecy that was given to King Hezekiah The Prophet Isaiah who is one of the major prophets, he went to the King and told the King you are about to die, put your home in order. So that is the discreet one, If I receive a prophecy about you I will tell you directly.

“Nathan was another example. It was a very difficult one but he went to David. We the men of God have brought this upon ourselves otherwise the Police has no right.”

The Ghana Police service has reiterated its caution to religious leaders against the use of mass media to communicate death prophecies and other prophecies that create fear and panic.

Speaking on TV3’s 2021 Year In Review, Wednesday, December 29, he said “The Police is not opposed to religious freedoms. Prophecy is something when it is done it needs to be done in a lawful manner in a proper way.

“We are saying, when you are communicating such things, make sure that you do not create fear and panic, you do not negatively impact on the lives of families, individuals, groups, associates, among others, and also visiting deaths and other things on people.

“One thing is, who even appointed somebody to determine that, to put that person in perpetual fear? One thing we want to know is, as a church, if somebody is in your church and you have seen something it is good that you arrange and meet that person, discuss it and see how as Christians how you can deal with it but not to use the mass media pronouncing deaths, pronouncing sickness and other mishaps. That is unaccepted and when you create fear and panic, I bet you, the Police will move in to apprehend whoever is doing that. We have put a sound argument across that we want every day to respect the constitution, respect the laws, individual freedoms.

“We are not saying we are going to use the law to cower any religious figure or personality, that is not the case. This thing has become a worrying trend.”

Meanwhile, the Founder of the Worldwide Miracle Outreach, Dr Lawrence Tetteh has noted that some prophets have abused the power of prophecies over the period hence the action taken by the Police against prophecies.

Speaking in an interview with Berla Mundi on the New Day show on TV3 Thursday, December 30, the renowned International Evangelist, and Economist said “We have abused prophecies that is why the police are acting this way.”

He however noted that the church has contributed to shaping the Ghanaian society hence they should be celebrated for this success.

He said “Ghana needs to really applaud Christian leaders for the goodwill. God has used the church to bring some sanity to this nation and we should thank God for that.”

The Police had cautioned Religious leaders in Ghana to be measured in their utterances, particularly the way they communicate prophecies, ahead of New Year Eve’s services.

“It is also a crime for a person, by means of electronic communications service, to knowingly send a communication that is false or misleading and likely to prejudice the efficiency of life-saving service or to endanger the safety of any person,” the statement signed by Superintendent Alexander Obeng, the Director of Public Affairs of the Ghana Police Service, added.

“A person found guilty under these laws could be liable to a term of imprisonment of up to five years.”

Friday’s services across the nation will be the first since Inspector-General of Police Dr. George Akuffo Dampare took office.

He had met religious leaders over prophecies deemed to cause fear and panic in the nation.

That meeting was precipitated by a fake gun attack on popular musician Shatt Wale, who had later indicated he took that action as a result of a prophecy by the Founder and Leader of New Life Kingdom Chapel, Bishop Stephen Kwesi Appiah, on an Accra-based radio station before the Monday, October 18 incident.

The man of God, popularly known as Jesus Ahuofe, was arrested and later granted a GH¢100,000 bail.

The police admitted that they are not against prophecies especially in a country where the centrality of God is in the life of many.

“There should be no apprehensions, therefore, about undertaking the various activities.

“We ask only that everyone keeps within the law and is mindful of the welfare of each other.”