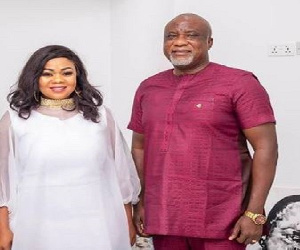 Empress Gifty shocked as husband phones in on her show

Husband of popular Ghanaian singer and presenter, Empress Gifty has surprised her on her TV show with a wonderful message for their third marriage anniversary.

Hopeson Adorye who is a renowned member of the New Patriotic Party (NPP) called his wife, Empress Gifty’s on Adom TV to wish her well and appreciate her for being a wonderful woman as they marked their 3rd marriage anniversary on December 29, 2021.

The gospel musician couldn’t hold her excitement as she screamed “my husband is here” when he phoned in during the show she hosted.

In a short message to his wife, he said: “Today is exactly three years and I called to wish you a happy anniversary and throughout the three years it has been enjoyable”.

The couple married privately in Tema on December 28, 2019, making Gifty Osei a wife for the second time after her over 10 years marital relationship with Prophet Prince Elisha Osei turned sour. The gospel artiste had denied being in a relationship with her now-husband until their marriage was made public.

In October that same year, Hopeson, a member of the NPP communications team updated his relationship status on Facebook, indicating that he is engaged to Gifty Osei. That deepened the speculations even though Gifty came out to debunk any marriage rumours.