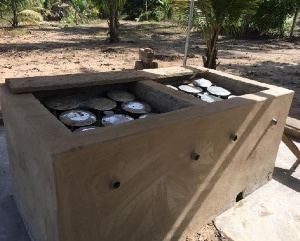 He said all the necessary conditions, weather, water, soil, and market required to produce catfish were available in the Eastern region.

Speaking to the Ghana News Agency, he said, “there is a big potential to develop the catfish industry.”

Most farmers engaged in tilapia production along the Volta lake, where they produce in cages.

Mr. Barnes said to promote the catfish industry, the directorate in Koforidua set up a fingerlings production facility to serve as a free learning centre for farmers and to help those without the facility to produce fingerlings.

He said about 35,000 fingerlings of catfish were distributed to farmers this year to promote catfish production.

He said catfish were easy to produce as they were generally stronger than tilapia and took five to six months to mature.

Mr. Derek Adjei-Sika, the Executive Director of Black-Gold Farms, said there was high demand for catfish in the market.

“I look forward to establishing a restaurant, which serves catfish foods very soon,” he said.

However, he noted, that he lost 3,000 catfish due to frequent power cuts, explaining that he used electricity to pump fresh water into the pond.

However, Mr Barnes observed that the catfish pond must have the right number of catfish in it with the right level of water.

There is no need to change or flash out water in the pond when all conditions in the pond are good, he noted.

Even so, the water in the pond must be changed when the fish tend to lose appetite and refuse to eat, he said.

Mr. Barnes said “catfish serves as economic relief” as it is a means to break unemployment in the region.

Mr. Barnes observed that the traditional means of smoking fish had health implications due to the smoke from firewood.

He encouraged all potential catfish farmers to visit or call on the directorate for advice or training.