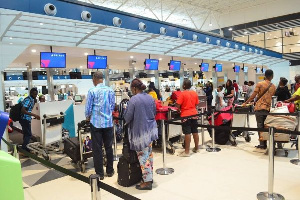 The Management of Ghana Airports Company Limited (GACL) says the arrival processes at the Terminal 3 of the Kotoka International Airport, on Tuesday, December 28, was interrupted at 2100 hours to take care of an unattended bag.

The Base Ammunition Depot Unit of the Ghana Armed Forces was immediately called in to conduct preliminary assessment of the bag and its contents, which was sighted at the arrival hall, a statement issued to the Ghana News Agency, on Wednesday, said.

“The bag was subsequently taken away for further investigations, the outcome of which will be made public,” it said.

The Management of GACL, consequently, apologised for the disruption in the arrival facilitation process during the period and assured the travelling public of its commitment to ensure their safety and security at our airports.

The statement was in response to enquiries made by the GNA to the GACL upon hearing about the incident.