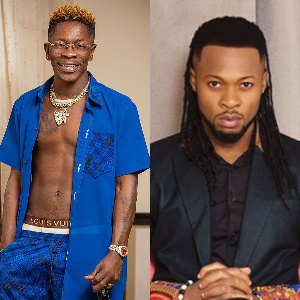 Shatta Wale gains another supporter for his comments on Nigerians

Flavour affirms Nigerians do not support other African acts

Flavour reveals Kenyans have boycotted Nigerian songs in their clubs

Shatta Wale has appreciated Flavour for supporting what he has said about Nigerian artistes and their behaviour towards other African acts during his performance at the ‘Freedom Concert’ on December 25, 2021.

During his Twitter rage, Shatta Wale stated that Nigerians should thank and respect Ghanaians because their musicians come to Ghana and other African countries for the numbers before becoming known around the world, but they don’t reciprocate the love.

Speaking in an interview with Big Brother show host, Ebuka, Flavour supported the view that Nigerians don’t support other artistes in Africa and cited Diamond Platinumz as one of Africa’s biggest acts who has more following than most artistes in America but his songs are not played in Nigeria.

“Numbers show us something. How can Diamond have a song with over 30 million views in a month and the song isn’t played as much as it’s supposed to be here in Nigeria? That shows you that something is wrong and then a song with 600,000 views is being played like Michael Jackson just resurrected,” he shared.

According to the Nigerian artiste, it is no surprise some countries refuse to play Nigerian music in their clubs because the support they give Nigerian artistes isn’t reciprocated, citing Kenya as an example.

This statement by the Nigerian artiste gave Shatta Wale the green light to speak out once more, pointing out the importance of Nigerians appreciating the African fanbase and encouraging other African artists.