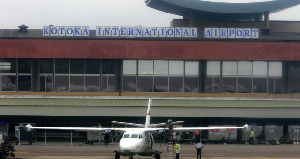 The private jet terminal will be opened on January 26, 2022

Travelling for business deals made easier

On January 26, 2022, McDan Group will officially open a private jet terminal at the Kotoka International Airport.

Chief Executive Officer of McDan Group, Dr. Daniel McKorley, in an interview with JoyBusiness and monitored by GhanaWeb noted that every private jet flying into Ghana would have to pass through this terminal.

He furthered that this commercial private jet terminal yet to be outdoored will employ over 400 people.

Dr McKorley described the establishment of the private jet terminal as an opportunity for businesses to thrive more in the sub-region and the continent as large.

“Travelling in Africa to certain places for businessmen, business executives are very difficult, very expensive hence, the need to open up this…When we talk about private jet terminal, it is a Fixed Based Operation (FBO). This is where you can walk in as a private person and pick a flight to anywhere you want.”

Announcing the date for the opening of the terminal, McDan said, “We are looking at January 26. It was supposed to be January 6 but there were to many activities in town so we moved it to January 26.”

So far, 3 jets and 1 helicopter are available for business and individual perusal.