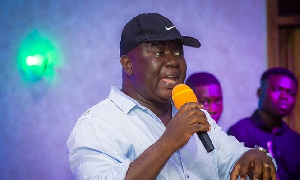 It appears the brouhaha surrounding the construction of the national cathedral has not yet gone to sleep as music producer and showbiz pundit, Fred Kyei Mensah has admonished critics of the project to stay off the issue in the coming year.

According to Fredyma, as he is populary called, there are choices in life and that people decide what they do with their monies.

One will recall that during the mid-year budget reading in July this year, government urged Ghanaians to contribute GHC100 a month to the building of a national cathedral in the capital, Accra.

The appeal was however criticised and trailed by a section of the populace who intimated that the project was a failed priority.

Reacting to the debate in a post on Facebook, Fredyma noted nobody can criticise others over how they spend their money monies. According to him, some Ghanaians bought tickets to attend various Christmas events but nobody has raised any issues against them because it is their own monies.

Fredyma therefore asserted there should not be any form of riticism directed at the contributors of the national cathedral project since they are equally doing same with their own monies.

He cautioned the critics to stay in their lane in 2022 or else they would be confronted with.

Read his full write-up below

Same way you, don’t question others when they decide to contribute their own money for the building of the Cathedral.