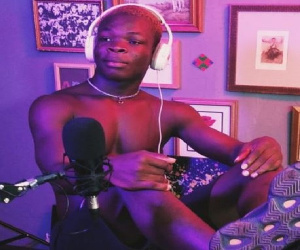 AY Poyoo is coming out with his first album

I was told to stop doing music, AY Poyoo

I am now the face of Hip-hop, AY Poyoo brags

20-year-old comic singer, AY Poyoo, has stated that a lot of people didn’t believe in him when he set out to do music but despite the bad comments he has been able to go international with his talent.

The ‘Goat’ hitmaker has given reasons for his recent absence from the music scene.

According to Poyoo, he is cooking something big in the studios.

AY Poyoo has told his fanbase known as Poyoorians to expect an album from him.

“Big ups to all the African countries. I really appreciate their love and support. Right now am working on a project that is my album. So, expect something big. Just big, so watch out,” AY Poyoo disclosed in an interview with BBC News Africa in 2020.

The artiste recalling his humble beginnings noted that critics discouraged him but he is proud of himself for not giving up on his big dream.

“I am waiting for Coronavirus to go so we start touring….They were telling me music and comedy wouldn’t take me far, It doesn’t pay. Right now, here I am and they are all my fans today.”

“Right now am the face of Hip-hop and whatever artistes they are, if they don’t take their work seriously, I will take all and then I will be the face of music,” he added.

AY Poyoo also told the BBC the inspiration behind his viral song ‘Goat’ released in 2020.

“I needed something that will make me blow. I needed something catchy for people to vibe with the Goat song… should I add ‘meee’ because goat is an animal and it bleats ‘meee’. I didn’t expect to be at that level but right now it has automatically changed my life because I’ve gotten international recognition… I don’t have money but I have Snoop Dogg’s comment on Instagram,” he said.