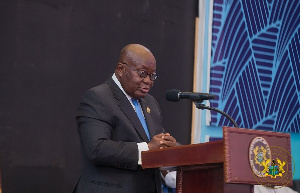 Ghana’s growth scaled down to 1%

Akufo-Addo is Forbes African of the year

President Akufo-Addo has underscored that Ghana managed to stay out of regression as far as the COVID-19 pandemic is concerned.

According to him, even though the halt in economic activities in the early stages of the pandemic had a huge impact on world economies, scaling down Ghana’s growth to 1% helped the country to maintain positive growth, unlike other countries.

President Akufo-Addo stated that “we had all these disruptions that we all know about, which has had a major impact on our economy and instead of growing at 7%, which is the average we have been growing at since 2017 up to 2020, suddenly, we had to scale it down to less than 1% growth”.

Most economies globally were hard hit by the devastating effects of the COVID-19, due to lockdowns and deaths of thousands across the world.

“The comforting thing is that we managed, unlike many of our neighbours, to stay out of recession. We didn’t go into negative growth and this is largely because the fundamentals that we had put in place during the period of rapid growth was sufficiently robust to withstand all the effects of the pandemic,” he said.

President Akufo-Addo lauded his administration for acting swiftly when the pandemic was in its early stages.

He recounted that their timely interventions have helped Ghana to stay in relatively low figures as far as the pandemic is concerned.

“I have been very fortunate to have people around me who acted quickly and came up with a task force and we created a series of measures that were put in place to contain it and that appears to have worked. We have some thousand-plus deaths which is unfortunate but I think in relative terms, if we look at the data to others, both on the continent and outside, ours has been relatively mild.”

According to him, government interventions such as the Ghana Cares program have been key in rejuvenating the economy.

“The Ghana Cares program has been about trying to reset the economy, trying to find the sources necessary to revive all the key sectors and then also to focus on the new sectors. We want to accelerate the enhancement of agricultural productivity, and hasten the industrial development of our country as well as the digital revolution and these programs which amounts to the 100 billion Obaatan Pa program that has been put in place addressing these fundamental concerns. We see that as a way of having the economy come back and returning to the high growth rates we had before the pandemic.”