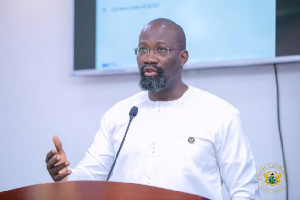 The Bulk Oil Storage and Transportation Company Limited (BOST) has achieved a tremendous turnover in 2021 through efficient management of the business of Storage and Transmission of fuels focusing on excellence in Security, Safety, and Profitability.

“To manage the business of Storage and Transmission of fuels focusing on excellence in Security, Safety and Profitability BOST undertook the rehabilitation of the Accra Plan Depot and initiated the Accra Plan Administration project.

“It also repaired the B2P3 pipeline, refurbishment of ‘TAPP’ pipeline from Tema to Akosombo and installed surveillance system on the TAPP, ongoing works on the Bolgatanga BRV park, and Kumasi Depot rehabilitation,” Mr Edwin Provencal, BOST Managing Director has stated.

Mr Provencal was speaking during the end-of-year assessment stakeholder engagement with the media which was used to outline the company’s achievement for 2021 and plans for 2022.

The engagement provided a platform for BOST to share its success stories and challenges with the media as part of efforts to promote probity and accountability.

The BOST MD noted that as a result of prudent management, the company is also undertaking supply and installation of mass flowmeters, pumps, and loading arms, ongoing works on the Tema to Kumasi petroleum pipeline Front-End Engineering Design (FEED), as well as repairs of Kumasi Depot Tanks.

Mr Provencal revealed that BOST would continue to work towards becoming the number one fuel and logistics business operator in West Africa.

He said BOST’s pursue to build Liquefied Petroleum Gas (LPG) tanks at all its Depots was progressing with the front-end engineering design.

He said the move was part of the Company’s strategy of aggressively growing its business by developing a network of storage tanks, pipelines, and other bulk transportation infrastructure throughout the country.

Mr Provencal said BOST has identified LPG as one of the opportunities for its growth strategy. The LPG tanks would contribute to meeting the growing demand for LPG products by consumers as it would generate more revenue for the government.

He said BOST is also rehabilitating its dipping platform at the Accra Plan Depot,

He stressed that BOST Bolgatanga Depot exported over 160 trucks of petroleum products to neighbouring countries since it commenced re-exportation in March 2021.

Mr. Provencal disclosed that the depot would play a critical role in the economic development of the country concerning foreign exchange reserves.

He noted that if the depot was fully utilized, it would have a direct impact on Ghana’s economy, and said the depot was positioned to take advantage of the African Continental Free Trade Agreement.