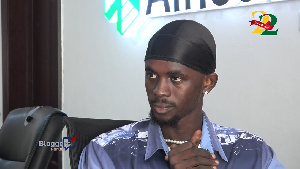 American rapper, Olubowale Victor Akintimehin, popularly called Wale has joined the many great in the music world who currently cannot have enough of the enormous talent Ghanaian sensation songwriter and singer, Black Sherif.

The award-winning rapper took to his Twitter on December 28 after Black Sherif’s performance in Nigeria with Burna Boy to state that one of his songs is just a crazy one.

The tweet from Wale reads: “Theat black sheriff joint is so crazy”.

It has so far got a lot of reactions on the timeline with the sensational singer also expressing his excitement.

The ‘Second Sermon’ crooner retweet what Wale said about his joint and told him he really appreciate the fact that he has listened to his song and finds it a good one. “Appreciate you Baba Folarin” Black Sherif wrote.