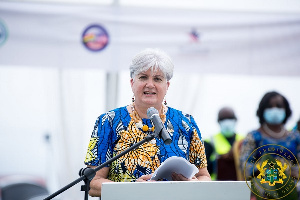 US Ambassador to Ghana, Stephanie Sullivan

US Ambassador to Ghana, Stephanie Sullivan, has reiterated the need for Ghanaian businesses to see the African Continental Free Trade Agreement (AfCFTA) as a game changer that could make Ghana the gateway to trade and investment in Africa.

According to the AfCFTA secretariat, the agreement when fully implemented will represent the world’s largest free trade area, with 55 participating countries covering 1.2 billion people with a combined GDP of US$3.4trillion.

“The AfCFTA has the potential to be a game-changer, not only for doing business across the continent but also for how the rest of the world thinks of Africa. It can truly make Ghana a gateway for the African market. U.S. companies already see the opportunity,” Ambassador Sullivan said during the opening of a new office of the American Chamber of Commerce (AmCham)-Ghana, at East Legon in Accra.

She announced that Ghana’s political stability, security, growing middle-class and its new role as host to the AfCFTA secretariat are attracting more U.S. companies as they look for growth opportunities on the African continent.

As Africa’s economy continues to develop, Ambassador Sullivan stated that the opportunity is ripe for the AfCFTA to deliver on its promise to expand intra-regional trade and capture new foreign direct investment.

She maintained that there is no doubt that the implementation of AfCTFA will affect U.S.-Africa trade relations and present immense opportunities for U.S. company trade and investment across the continent.

This, she said, will significantly accelerate intra-Africa trade, becoming an engine of growth and sustainable development.

Ambassador Sullivan applauded the American Chamber of Commerce-Ghana for launching its AfCFTA Resource Centre – describing it as an effort to help U.S. companies understand more about implementation of the AfCFTA agreement.

“AmCham-Ghana has its eye on the future as it looks to position itself for success in Africa’s rapidly changing business environment,” she said, adding that the Resource Centre will further encourage U.S. businesses to see Ghana as the gateway to trade in Africa.

She is hopeful that when American companies come to set up shop in Ghana, they can use the new office facility of AmCham as a temporary office to conduct meetings with potential business partners and other local stakeholders. “This move to a bigger and better facility in East Legon is proof the trade and investment relationship between Ghana and the United States continues to grow from strength to strength.”

On his part, the Executive Secretary of AmCham, Simon Madjie, said the AfCFTA centre’s importance cannot be overemphasised since it changes the trade dynamics on the continent. “For us, it is a proactive move to help explain and open the continent up for American businesses working in partnership with local companies to access benefits of the AfCFTA.”