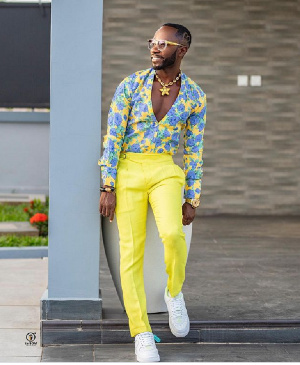 Okyeame Kwame dances to Cecilia Marfo’s mondegreen during a performance

Ghanaian rapper, Kwame Nsiah-Apau, known by his stage name as Okyeame Kwame, decided to add spice to his performance with Cecilia Marfo’s popular ‘washawa say’ mondegreen at the just-ended ‘The Hiplife Party’ on Saturday.

The 45-year-old artiste danced with his leg up and chanted ‘wonan naa’ as he served his audience with some good music at his just ended “The Hiplife Party” at the +233 Pub and Grill in Accra on December 25.

Fans however couldn’t hide their excitement as many joined him to do the dance of the famous ‘mantra’ by the gospel artiste, Cecilia Marfo which has become popular among Ghanaians on social media.

Aside from Okyeame’s performance, Abrewa Nana, Nana Agyeman, Flowking Stone, Ex-Doe, Akatakyie, and a host of other artistes graced the event and performed alongside him.

The event was the 2nd edition after the first which was organised last year on December 25, 2020.