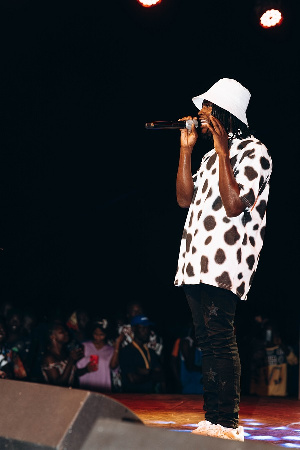 Ghanaian Afrobeat star Fancy Gadam says his concert held at the Bukom Boxing Arena on Christmas Day was the biggest in the capital considering the massive numbers that showed up.

There were numerous concerts held on Christmas Day in Accra, with the likes of Sarkodie staging the ‘Rapperholic’ concert at the Grand Arena of International Conference Centre while Medikal and Shatta Wale combined for the ‘Freedom Wave’ concert at the Accra Sports Stadium attracting thousands of music fans.

Fancy Gadam’s “One Don” concert also pulled massive crowds at the Bukom arena as the award-winning musician delivered a masterclass performance to thrill the thousands gathered at Bukom Boxing Arena.

According to Fancy Gadam, he was overwhelmed by the numbers that trooped to the arena to watch his concert despite charging GHC 50 at the gates.

“I am the real ‘One Don’ of Ghana music. My concert was the biggest in Accra on Christmas Day, judging from the numbers that came to the Bukom arena and I would have filled the Accra Sports Stadium to its full capacity even with the same rate because other shows were charging GHC 10 per head for entry.

“I am grateful to my fan base “Gadamnation” who came out to support me as their support cements my legacy as one of the top Ghanaian artists with the largest fan base in the country,” he told the Ghana News Agency.

He added that his next concert would be in Kumasi as he targets to fill the Baba Yara Sports Stadium and would announce the date of the concert in the coming days.

Fancy Gadam back in November also filled the Aliu Mahama Sports Stadium in Tamale when he staged the first edition of the ‘One Don’ concert after releasing his eight-track Extended Play (EP).