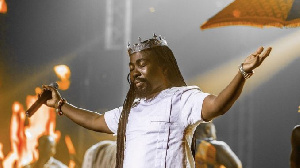 Obrafour talks about his faith

Obrafour reveals his dream as a child

Obrafour details how he became a musician and not a lawyer

Sarkodie acknowledges Obrafour on his knees

Obrafour has attributed why he lost faith in God and the Bible to when he lost his mother at a tender age.

Michael Elliot Kwabena Okyere Darko popularly known as Obrafour made this revelation on Accra-based Asaase Radio when he spoke about his career, religion and aspirations as a child before he lost his mother.

“When I lost my mum, I lost my faith and I could not comprehend why God would take her from me and so I ran away from home. It was a tough time

“I only resorted to music and fell in love with it after I lost my mum; one finds their destiny on the path they choose to avoid,” he said.

The rapper, however, revealed he wanted to become a lawyer like his grandfather while growing up but destiny had its own plans and turned him away from that dream.

“I never thought that music would become something I would do and become known for; I wanted to become a lawyer like my grandfather”, he added.

Obrafour was recently acknowledged by Sarkodie when he went down on his knees while they both performed a song together at the Rapperholic Concert on December 25, 2021.