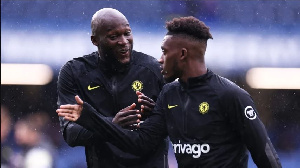 Chelsea came from a goal down to beat Villa 3-1 with substitute Lukaku on target as well as Jorginho who scored two penalties.

The Blues were trailing when the bulky striker was introduced and he ensured that they took home all three points.

Hudson-Odoi said, “Rom is an amazing player. His strengths are very good for us upfront. He knows how to hold the ball up so we can play around him really well.

“When we get the balls into the box, he’s always there to try and get a header or control it and set it back for the player behind him.

“He’s a massive player for us and we have to keep going, keep feeding him the ball in and around the box and hopefully he can find the back of the net.”

Hudson-Odoi also admitted he was happy to be back on the pitch Sunday after missing two games due to Covid.

“Being out for a week has been difficult. It’s good to be back and I just want to keep pushing from here.”