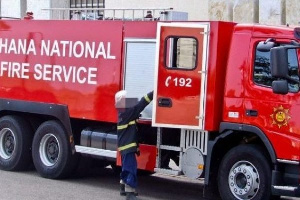 The Ghana National Fire Service (GNFS), has recorded 22 fire incidents in the Greater Accra Region during the Yuletide.

The incidents, which were recorded mostly in Accra and Tema, are under investigation to ascertain the actual causes.

Assistant Chief Fire Officer Timothy Osafo-Affum, the Public Relations Officer of the Service, told the Ghana News Agency, that on December 24 2021, the Service recorded four fire incidents, three in Accra and one in Tema.

ACFO Osafo-Affum said though the number of fire incidents had reduced as compared to what was recorded last year around the same period, it was high as they anticipated a zero fire outbreak during the Christmas festivities.

He described fire incidents during the festivities as unfortunate and urged the public to be extra careful with the use of naked fire such as candles, lighter, matches, lanterns, and mosquito coils.

“Even in our cautiousness when the fire occur, do not hesitate to call the Fire Service on 192 before you try to extinguish it”, he said and urged the public to adhere to best fire safety practices to prevent fire outbreaks.