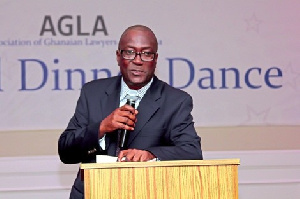 Professor Henry Kwasi Prempeh, Executive Director of the Ghana Centre for Democratic Development (CDD), has indicated that electing Metropolitan, Municipal and District Chief Executives (MMDCEs) on party lines was the best way to go in the larger interest of Ghana’s democratic dispensation.

He says apart from holding the elected MMDCEs accountable for their actions and inactions, “the involvement of parties at that local level has the potential to revive and strengthen the third political parties in the governance system and also allow the electorates to choose their leaders at the local levels”.

“Electing our MMDCEs with no party affiliations would be chaotic, and so we need to build consensus to agree on the modalities of strategies of implementation; in that direction, CDD and other stakeholders have come up with several proposals in anticipation as well as to meet the consequential demands.”

Professor Prempeh was making a presentation of the options for local government reforms proposed by the CDC to some selected journalists in Koforidua as part of ongoing consultative forums aimed at advocating the agenda for Local Government reforms in Ghana.

The CDC-Ghana and its partners are undertaking some activities, including nationwide regional consultative forums in the 16 regions of Ghana to reset the agenda for the election of MMDCEs and advocate for comprehensive local government reforms.

In 2019, President Akufo-Addo, in line with the NPP 2016 manifesto, proposed two constitutional amendments to article 55(3) to change the mode of appointing MMDCEs and a corresponding amendment to article 243(1) but was redrawn by the president on the grounds of lack of consensus.

Whiles the NPP captured the same in the 2020 manifesto on party lines, the NDC, on the other hand, has captured it, but on non-partisan lines and a CDC, a survey has shown that close to 80 per cent of the Ghanaian people want the election of the MMDCEs.

According to professor Prempeh, some of the proposals made with regards t the elections of the MMDCEs is that the election could be on a pilot basis at the Metropolitan and Municipal areas and then using the District and Local level elections model of town hall meetings as platforms for the campaign.

He explained that the concerns of the public were the tensed and polarized nature of political campaigns, and therefore, they were proposing the use of the DLE model where candidates would not be allowed to do rallies or mount other open forms of campaigns except for the town hall meetings which were guided by principles.

Professor Prempeh called on the media to propagate the information on the need to elect our MMDCEs and on party lines instead of the current situation where the president appoints, and Assembly members endorse.

“That system is an elitist attitude and a colonial understanding, but now local people have the capacities to elect their representatives to spearhead the development, and we may all support that agenda to broaden our developmental pursuits.”

He said the current local government system was too much centralized stagnating development and amount Accra so choose at the blink of explosion adding that under the reforms “we are proposing that as a country we can have several administrative regions and not necessarily Accra as the nation’s capital.”