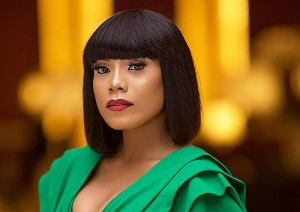 Actress Zynnell Zuh has denied claims that she is now a mother after rumours say she has given birth to a baby girl.

According to her she has not given birth and described the rumours about her supposed new baby as “fake.”

But the award-winning actress has said the rumours are “fake”.

She wrote; “My attention has been drawn to your Instagram page with the account name “cutie_juls” indicating that I have given birth to a baby girl which has resulted in several responses and comments from several people.

You know that your said post about me is fake.

I implore you to take down that post about me immediately and also inform all your followers that your said post about me is fake and unfortunate. Be advised.”

Zynnell Zuh is one of Ghana’s leading actresses doing well for herself. She has over the years managed to keep her love life out of the public domain. The baby rumours are also new to her.