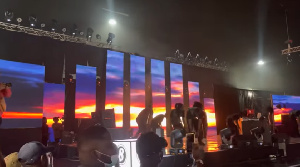 play videoStage atmosphere as Sarkodie is being welcomed by dancers

Ghanaian rapper, Sarkodie was introduced on stage in a spectacular manner at the 2021 edition of the ‘Rapperholic concert’.

The ‘stylish entry’ has since drawn reactions from fans both at the event and on social media.

Sarkodie, ‘the man of the moment’ was preceded on stage by a group of dancers who put up a spectacular choreography.

This group of dancers performed to the background instrumentals of Sarkodie’s ‘No Pressure’ with stage lightening forming an artwork on stage.

Sarkodie then came in amidst loud cheers from the crowd and then he began to drop the hits.

The ‘Coachella’ hitmaker performed old classics as well as songs from his ‘No Pressure’ album.

Just like in previous years, Sarkodie’s 2021 edition of the ‘Rapperholic’ concert drew a massive turnout from fans.

Held at the Grand Arena, there were several performances from artistes from Ghana and Nigeria.