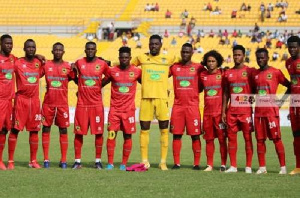 Coach Prosper Nartey Ogum showed his former side WAFA what they are missing as his side Kotoko inflicted a solitary 1-0 defeat on them in their matchday ten clashes at the Baba Yara Stadium.

The Porcupine Warriors who recorded a 2-1 win against Legon Cities last weekend needed a Richmond Lamptey strike to beat the Academy boys.

The former Inter Allies player shot from the inside of the box to condemn his former side to another defeat on the road.

Stephen Amankona headed wide from a corner kick as Kotoko started chasing the game on a strong footing. Justus Torsutsey shot from long range to catch Abalora off his line but his effort went wide.

Both teams played with great team chemistry but Asante Kotoko looked hungrier for the points in front of their home fans. Fabio Gama fed off a pass from Amakona in the 25th minute but the Brazilian shot wide to leave the scoreline unchanged.

VIDEO OF HIGHLIGHTS BELOW: