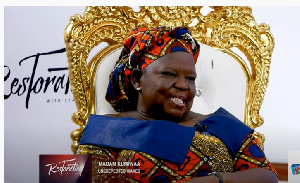 I was never sent to school, actress discloses

Maame Kumiwaa says her father did not trust girl-child education

Naomi Kumiwaa Banaffoe, a popular Ghanaian actress, known widely in the movie industry as Maame Kumiwaa, has disclosed that her father never sent her to school during her childhood days.

In a bid to answer a question on what she had wanted to become in future whiles a child, she told Stacy Amoateng of the Restoration Show that she was not sent to school so she never had an idea of what she’d become in the future.

She said, “I would have gone to attack my father right from here should he be alive; my father never sent me to school although I forced him to, he never did.”

Maame Kumiwaa further explained that her father did not send her to school with the reason that women will still get married or be in the kitchen after school.

“My father said when a woman attends school, she’ll either take it to marriage or be in the kitchen but it is not like that now. If he was still alive, I’d have told him that the past is not like today because now what men can do, women can also do the same,” she told the narrated.

Meanwhile, she has recounted how she ended up in the American prison for being wrongfully accused of smuggling cocaine.

She has vowed never to travel to America again after the cocaine incident.