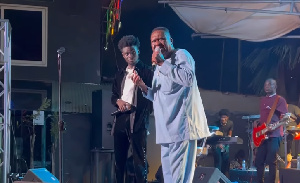 Highlife veteran artiste, A.B. Crentsil, has escribed Kuami Eugene as a remarkable artiste alluding to the fact that he had heard of the Rockstar but never met him until the ‘Boxing Day Highlife Show’ held at +233 Bar and Grill in Accra.

Eugene Kwame Marfo popularly known as Kuami Eugene performed with the 78-year-old veteran artiste AB Crentstil on some of his biggest hit songs, including the controversial ‘Moses’, which was reportedly banned for its suggestive lyrics.

According to the veteran musician, Kuami Eugene was an embodiment of highlife.

Kuami Eugene appreciated A.B Crentsil by presenting him gift items and an undisclosed amount of cash for his hard work over the years and for encouraging him to continue promoting highlife music.