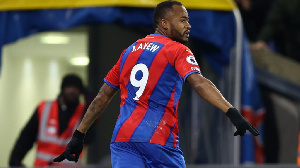 The Black Stars striker recently ended his goal drought against Southampton and according to him, the former Arsenal star’s effort was key in breaking the goal duck.

“I knew it would come sooner rather than later. It came, but it’s just one goal. I know I need to be more efficient, I need to be ruthless in the last 30 metres. There’s a lot of things that I can be more ruthless at.

“I’m working on it, and hopefully this will give me a lot more confidence in the future.”

“I’ve been in the game for quite a long time now,” he said. “There are some periods in your life where things don’t go your way, and some periods where they go your way. I’ve had that period for a couple of months.

“When I go home I will have no regrets because I know I have given 100%. That is what is important for me.”

“It’s positive, very positive,” he said. “At the start of the season people found out about the new manager coming in and what it was going to be like. We adapted well to the new manager and the manager adapted himself to us as well.

“It’s been a great start and everything is going well. It’s a positive thing for me, especially as someone who watched [Vieira] growing up. Today being my manager, I never expected it. He’s a winner and we’re all happy because we want to learn from him.

“We believe in his style of play. It’s attractive football and for every player, you want to play this type of football.

“He has changed a lot, not only for me but the whole club. That philosophy, the different mindset. Everyone in the club is happy to have him and everyone is pleased to be working under him.”