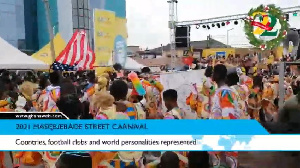 The US flag dominates foreign flags at 2021 Maquerade festival

The 2021 Sekondi-Takoradi Street Carnival also known as Masquerades Festival saw a massive turnout than the previous years coupled with the other mainstream media coverage from the big media houses in Ghana.

The Ankos Festival, also known as the Takoradi Street Carnival or Masquerade Festival, is a yearly Ghanaian festival held in the Western Region, as the indigenes’ way of entertaining themselves during the Christmas festivities.

It is around this time that people from Sekondi Takoradi and other parts of the Western Region, who have travelled out of the region and outside the country, return home to join their families and fiends to celebrate Christmas.

The carnival which is held at Sekondi-Takoradi is being reported to have witnessed over 40,000 people from all over the world to see the dazzling spectacle this year.

Participants of this year’s carnival especially those leaving abroad seized the opportunity to showcase the national colours and cities where they reside outside the boundaries of Ghana as part of their celebrations.

Others also showcased the colours of the soccer teams that they support in the world.

Watch the video below as GhanaWeb cameras captured some of the scenes as the 2021 Masquerade Street Carnival: