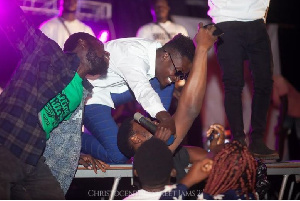 Some patrons at the Christocentric Street Jam

A Christocentric Street Jam has been held at Nyankpala as a means of reaching out to the youth and introducing them to the gospel with music as the main driver.

The event, held at Nyankpala in the Tolon District of the Northern Region, saw artistes of various genre perform to the crowd, who came from various parts of Tamale and Tolon.

The lyrics of the artistes were biased towards the Christian doctrine but sang in various genre including reggae, hiphop, rap and afrobeats to talk about Jesus Christ and his works and it was to serve as an evangelistic tool to draw the youth closer to Christ.

It was organised by Each One Reach One (EORO) Impact Ministries, a religious organisation.

Artistes mostly from the EORO Impact Ministries namely Channy, Luchi, Joey Sarf, Apaase, Asoredee, Bhangha and Diya excited the crowd with electrifying performances of their own music and stagecraft that would linger in the minds of the crowd for a long time.

Miss Deborah Oforiwaa Acquah, Music Director of EORO Impact Ministries, spoke about the rationale for organising the event, saying “The youth of today have grown tired and gotten bored of the version of gospel music our fathers were accustomed to and thus are being drawn to a new form of music outside the church making church services lose the excitement for them as it’s meant to be. If gospel music fails to evolve with the times we will lose our youth to the world and we will be to blame.”

Doreen Tsigbey, a Nursing Student from the UDS Dungu Campus, said “I came expecting usual boring kind of gospel music we are used to at programmes like these but to my surprise the music they sang was similar to tracks I would have expected to hear in a club yet the lyrics were all positive and drawn straight from the Bible. I was really impressed by their creativity.”

The church began as a non-denominational ministry in 2006 until 2016 when the Founder, Reverend Appiah Wae Yaw, went forward to make it a full church on the 10th of January 2016, and it now has five branches in five other regions of the country.