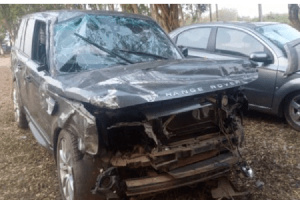 The disfigured Range Rover of Berekum East MP after the accident

Member of Parliament (MP) for Berekum East constituency, Nelson Kyeremeh, has been involved in an accident.

Rainbowradioonline.com has gathered that four persons are injured as a result of the accident.

The MP was said to be returning from Sunyani to Berekum in his Range Rover when the accident occurred at Nsuatre in the Sunyani West Municipality on December, 25.

According to eyewitnesses, a ‘Pragya’ crossed Mr Kyeremeh’s car and in an attempt to save both the Pragya and the passengers, he drove into a stationed private car and hit four other persons.

The four were rushed to the Nsuatre health centre.

However, two were later transferred to the Sunyani Regional Hospital.

Mr Kyeremeh and another in his vehicle were rushed to the Sunyani Regional Hospital due to unstable conditions.