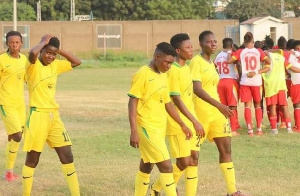 Soccer Intellectuals were held to a pulsating 1-1 draw at home by visiting Sea Lions in Week Two of Women’s Premier League on Saturday.

The home side were the better team at the early part of the game as they made early incursions and pinned their opponents into their own half but could not make use of the descent chances that came their way.

Lions were forced to make an early change when first team goalkeeper Martha Annan complained of dizziness and had to be replaced by Mercy Sika Dogbe in the 10th minute mark.

Soccer Intellectuals continued their search for the opener and their efforts were rewarded when Striker Adinda Akpo drew the first blood in 41st minute after connecting from a well taken Cecilia Hagan corner kick.

The lead lasted for only three minutes as Juliana Boafowaa fetched the equalizer for the visiting team in the 44th minute.

The second half was a ding dong battle as both side continued to fight for the three points – the most descent chances came the way of the host team but they failed to make good use of them as the game ended 1-1.

The result leaves both teams without a win after round of games in the Women’s Premier League as they both have 2 points each from the matches played so far.

Soccer Intellectual’s Cecilia Hagan was crowned the most valuable player of the game.