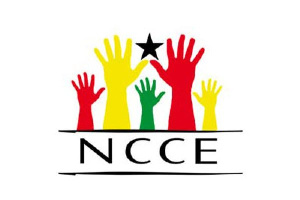 The National Commission for Civic Education (NCCE) has commended its staff across the country for exhibiting strength in the face of calamity during the epic stages of the COVID-19 pandemic.

They are also commended for defying all odds, and undertaking public education.

“Our civic educators and field officers entered shrines, churches, mosques, markets, as well as educational facilities, the communities, stood along the roads and stressed with placards, crossed rivers and used bad roads just to educate people about the COVID-19 pandemic.

Ms Nkrumah was speaking at a five-day information sharing and end of year review workshop organised by the Commission with support from the European Union (EU) noted, “we appreciate the role of all staff including cleaners, drivers, staff, and management for contributing to a successful fiscal year of the Commission at Dodowa in the Greater Accra Region”.

The workshop was attended by the NCCE Executives, Management, the 16 Regional and Deputy Regional Directors, and Heads of Units of the Commission aimed to reflect and evaluate the Commission’s performance throughout the year, critique, and share ideas and experiences.

The NCCE Chairperson also acknowledged the 2021 Transparency and Social Accountability Award from the Ghana Integrity Initiative (GII), the local chapter of Transparency International and examined the challenges the Commission faced.

It was intended to strengthen the capacity of Directors to undertake education and sensitization activities on Violent Extremism in the five border regions, coastal communities, and hot spots in the country.

Other areas were strategies used in recruitment and radicalization by violent extremist groups, peacebuilding mechanisms, re-emergence of secessionist movements in Africa, lessons for Ghana, and actors involved in violent extremism.

Colonel Tim Bata-Banah, Director, Counter-Terrorism and Fusion Centre at the Ministry of National Security, said NCCE played a critical role in the national security strategy and charged the Commission to contribute to the prevention of violent extremism and terrorism in Ghana.

Ms. Kathleen Addy, Deputy Chairperson, Finance and Administration, commended the European Union for its continued support for the Commission’s activities over the years.

She said the end-of-year engagement created an opportunity for the Commission to dialogue on effective mechanisms to strengthen the relations between the two institutions.

Ms. Addy charged all the participants to be proactive, vigilant, and meticulous towards fulfilling the mandate of the Commission in the coming year, adding that “the work of the NCCE is being appreciated nationally”