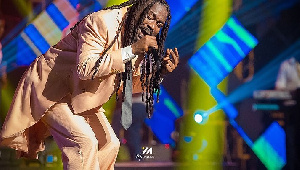 Image Bureau boss George Quaye has paid a glowing tribute to organisations and individuals who contributed immensely to the success of Samini Xperience Concert.

Held on December 24, 2021, the event which was headlined by Samini saw thousands of persons throng the Grand Arena to witness performances from the Dancehall music giant who had clocked 40.

It was not just a musical concert but an experience with the man who has been in the industry for two decades, entertained music enthusiasts, grabbed ambassadorial deals, laurels among others. Regarded as one of the best as far as live band is concerned, Samini thrilled patrons with captivating performances of his major hit songs – right from his days as Batman to Batman Samini and then Samini.

On the bill were some musicians Samini has had collaborations with including KK Fosu, Kuami Eugene and KiDi.

“Many brands and people came together to make it a success and it would be totally wrong if I didn’t take a minute to appreciate them”, said George Quaye in a social media post, Sunday.