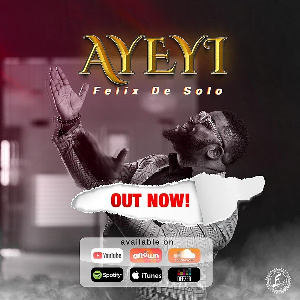 In a short interaction with filmmaker and publicist Skbeatz Records, the talented musician narrated what inspired his new composition ‘Ayeyi’.

“I always want to thank God for the great and wonderful things he has done for me over the past years. I went through some hardship within the COVID period. All hopes were gone, People criticizing and all but God showed himself so strong, therefore the need to sing about His goodness.

“Expressing myself through screaming praise thanksgiving melodies, and this season is the season of the Lamb of God #Onyame Eguama so it’s worth exalting Him. He is a Good GOD.”

He went on to narrate how hard of a struggle it had been for him, but the Grace of God pulled him through, thus, his song ‘Ayeyi’ to praise and thank God.

“I’ve struggled kakra and it was worth it. Even till now, people who don’t understand me keep judging and criticizing me, but God is my only Hope.”

He did, however, announce his intention to compile all of his songs into an album titled “Appreciation.”