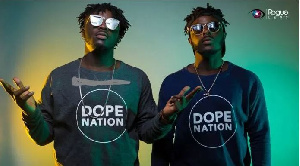 Ghanaian music duo, DopeNation, was pushed off stage after their mics were seized by an angry DJ Krept for poor performance.

According to reports, DopeNation broke the rule by performing an Afrobeat song at a strictly rap show.

Following that, the DJ decided to seize the microphones and walk them off stage for not going according to plan and laid down procedure.

It is alleged that DJ Krept, who is the personal DJ of Joey B, decided to put up that attitude in order to send a clear message to E.L about an outstanding rift.

In the video, one of the twins was asked by his brother to let go of everything and bounce off the stage as directed.

DJ Krept did this to Dope Nation and EL kept mute over it. That’s nonsense bro. Pure disrespect. pic.twitter.com/zBCDbYMDTE