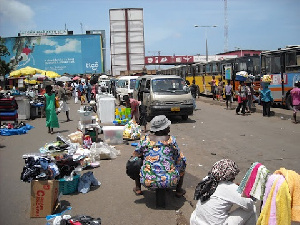 Authorities are being accused of extorting money from vagrants

Traders at the new Makola N0.2 Market (Gallaway Market) have expressed their displeasure about tolls being collected from them for accessing the market through the gates of the Ghana Railways Authority.

The angry traders and customers alike accuse officials of the Railways Authority at the Accra Central Main Station (Head Office) of extorting money from them for just using the gate.

The aggrieved traders, most of whom are vagrants said, the coercive toll is affecting their livelihood and that of other poor citizens who make a living from the market.

Vagrants are part of the poor and other voiceless persons (the homeless, street hawkers, head porters, truck pushers, etc.) who do not have a fixed abode and source of income. Due to their vulnerability, they are often arrested, fined, and sometimes imprisoned under various laws for ‘no serious crimes’ committed.

The concerns of the traders were made known to a CCF-monitoring team during monitoring within the Accra Metropolis on Tuesday, 7th December 2021.

The monitoring formed part of the implementation of CCF’s “Decriminalizing Vagrancy Laws and Advocacy” project is supported by the Open Society Initiative for West Africa (OSIWA).

Speaking on the issue, a leader of the CCF-constituted Community Monitoring Team (CMT), Anthony Kyei Baafi said “the officials of the Ghana Railway Authority take fifty pesewas from people who access the market through this particular entry”.

He expressed worry that “collection of the entry fee (gate fee) from market women, the homeless, head porters (kayayes), and truck pushers is taking a toll on their livelihoods.”

Mr. Baafi who is also a market leader noted that, “at the time they are entering the market, most of them do not have money on them since they must first get to the market in order to do business where they will be able to raise some money”.

In addition, he indicated that the situation is slowing down business as prospective buyers are avoiding the market.

He said though they have put together a committee to deal with the matter, the Railways Authority is refusing to back down on its decision.

He is therefore calling on appropriate authorities to intervene to call the Railways Authority to order.