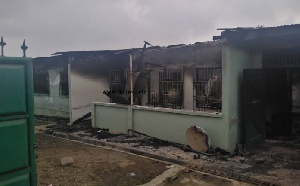 Some residents of Buokrom B-Line, a suburb of Kumasi, did not start the holidays on a good note as fire razed down a house and killed two residents including a toddler.

Reports Akoma FM has gathered explain that four persons have been rushed to the Komfo Anokye Teaching Hospital (KATH) as a result of the incident.

Aside the two lives lost and the several injuries, properties amounting to millions of Cedis were destroyed.

But for the timely intervention of personnel from the Ghana National Fire Service, a different story might have been told, he said.

Nana Agyei told the host of the show Aduanaba Kofi Asante Ennin that “once we saw the fire, we quickly called the GNFS and they intervened [in] the situation else the fire could have spread to other houses”.

Spokesperson for GNFS in Ashanti Region DO3 Peter Addai cautioned the general public to be extra careful as the Harmattan intensifies.

He further advised farmers and other professionals who work with fire to comply with fire safety rules to ensure the Yuletide is safe to protect life and property.