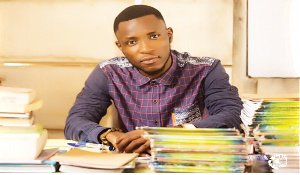 Teacher Kwadwo, who was a thorn in the flesh for Ghana Education Service before his controversial sack, has now ventured into music.

The comedian announced his presence in the music industry through a caption he attached to the most recent post on his Instagram page.

According to Teacher Kwadwo, he’s done with his first album and he will premier it on the various music platforms this Monday.

Teacher Kwadwo’s debut album is dubbed “GES” which means “Get Everything Seriously.”

He wrote; “1st STUDIO ALBUM drops on Monday. Album is titled “GES. Meaning “Get Everything seriously”.

We pray that Teacher Kwadwo finds success in his new profession because many people tried to venture into music and failed miserably.